Warning: Use of undefined constant NL - assumed 'NL' (this will throw an Error in a future version of PHP) in /var/www/html/higherwages/wp-content/themes/HIGHERWAGES/basic.php on line 30
 Raise the Minimum Wage to $12 an Hour - Higher Wages for American Workers


Raise the Minimum Wage to $12 an Hour 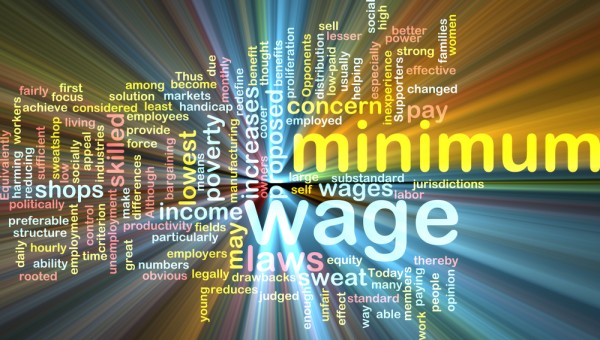 Tens of millions of low-wage workers in the United States are trapped in lives of poverty. Many suggestions have been put forth to improve their difficult situation, ranging from new social welfare programs to enhanced adult education to greater unionization. But I think the easiest solution is also the simplest: just raise their wages.

The current federal minimum wage is $7.25 per hour and hiking it to $12 would solve many of our economic problems at a single stroke.

A $12 minimum wage is hardly extreme or ridiculous. At the 1968 height of our post-war economic prosperity, the American minimum wage was over $10.50 in current dollars, and setting the rate at $12 today would represent a real rise of merely 11 percent over a 45-year period, which seems reasonable since worker productivity has grown by over 115 percent during the same period. The minimum wage in France is almost $13 while Australian workers benefit from an hourly minimum wage of around $15, together with unemployment of just 5.7 percent.

Walmart is America’s largest private employer and 300,000 of its workers have average wages of just $8.75 per hour, forcing many of them to receive food stamps and other government welfare benefits to survive. But if a minimum wage hike boosted their pay to at least $12 per hour, Walmart could cover the costs by a one-time price rise of just 1.1 percent, and the average Walmart shopper would only pay an extra $12.50 per year. Meanwhile, a $12 minimum wage would increase the incomes of America’s lower-wage work force by a total of over $150 billion each year, shifting those huge sums from the pockets of the sort of people who don’t shop at Walmart to those who do. A minimum wage of $12 per hour would be very good for Walmart’s business.

And not just Walmart. America’s low-wage families tend to spend every dollar they earn, so a large minimum wage hike would constitute an enormous, permanent economic stimulus package, but one funded entirely by the private sector. Since wages would be rising nationwide, businesses could raise their prices to cover much or most of the added costs. Low-wage workers tend to be employed in the non-tradeable service sector, making their jobs relatively safe from foreign competition or automation. They’d keep their jobs, but their incomes would rise by 30 or 40 percent.

The impact on U.S. households would be enormous and bipartisan. Some 42 percent of American wage-workers would benefit from a $12 minimum wage and their average annual gain would be $5,000 per worker, $10,000 per couple, which is very serious money for a working-poor family. White Southerners are the base of today’s Republican Party, and 40 percent of them would gain, seeing their annual incomes rise by an average $4,500 per worker. If Rush Limbaugh — who earns over $70 million per year — denounced the proposal, they’d stop listening to him. Hispanics would gain the most, with 55 percent of their wage-workers getting a big raise and the benefits probably touching the vast majority of Latino families.

Ordinary taxpayers would be the other great beneficiaries, saving many tens of billions of dollars each year in payments for Food Stamps, the Earned Income Tax Credit, housing subsidies, and other social welfare programs. Businesses should pay their own employees rather than quietly shifting the burden to government programs and the American taxpayer. Conservatives and free-market supporters should endorse this simple idea.

The best way to help low-wage workers is to raise their wages.