Warning: Use of undefined constant NL - assumed 'NL' (this will throw an Error in a future version of PHP) in /var/www/html/higherwages/wp-content/themes/HIGHERWAGES/basic.php on line 30
 Open Borders, American Elites, and the Minimum Wage - Higher Wages for American Workers

Views change about massive immigration once both sides of the issue are heard
By Ron Unz • The Unz Review • November 11, 2013 • 1,600 Words 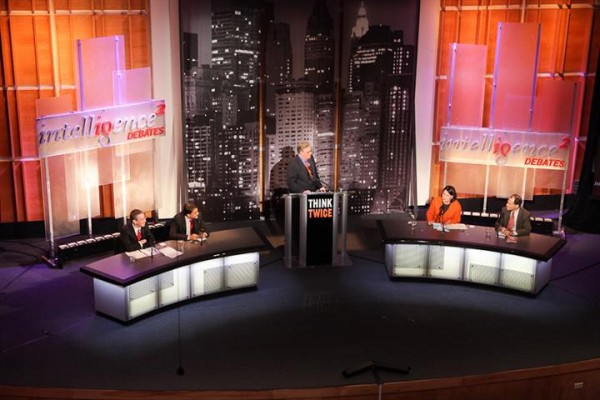 Last week I took a brief break from two months of concentrated software development effort on my new publication The Unz Review to travel to NYC for a debate on a hypothetical “Open Borders” proposal for private employment, one in a long series of such public events produced by Intelligence Squared. The event was carried on NPR and rebroadcast on some television outlets, but may most easily be watched online at their website, with the organizers also making available a convenient transcript.

Although the debate was a useful discussion of an interesting issue and went well, I believe its greatest value were some of the ancillary aspects, including the important insights it provided into the unchallenged assumptions of America’s insular ruling elites.

Under the regular operating rules, the organizers held before and after votes of the large New York City audience, regarding the winning side as being the team that shifted the margin in their direction. Given my two decades of past writing on immigration issues, I found it quite ironic and amusing that I had been selected for the “anti-immigration” side of the debate, together with Kathleen Newland, co-founder of the eminently pro-immigrant Migration Policy Center. This indicates how yesterday’s fringe ideas have now become the accepted mainstream views of the American elites. The resolution under consideration was certainly as extreme and radical a formulation of the views of economic libertarians as might be imagined: “Let Anyone Take A Job Anywhere.”

Under the literal interpretation of such a proposal, one can easily imagine twenty or thirty million of the world’s desperate poor coming to America within the first few years of enactment, drawn from a global pool numbering in the billions. The resulting social and economic changes would be on a scale unprecedented in human history let alone America’s past, and the potential for an utterly destructive outcome leading to the collapse of our society seems completely obvious.

Nonetheless, at the pre-debate vote the supporters of this proposal outnumbered opponents by a landslide margin of some twenty-five points, 46% to 21%, while one-third of the audience remained undecided. Indeed, during the televised pre-debate discussion between the moderator and the Intelligence Squared chairman, some doubts were expressed that any intelligent person could oppose such a sensible free market policy in labor mobility.

Once the debate began, I focused on the obvious point that the law of supply and demand ensured that a huge increase in the number of willing workers would greatly reduce their economic bargaining power against their employers. Wages for ordinary Americans have been stagnant for forty years and it is probably more than pure coincidence that the last forty years have witnessed one of America’s greatest waves of foreign immigration. Adopt a proposal that immediately increases such immigration levels by a factor of five or ten, and America’s minimum wage would be transformed into its maximum wage, with the natural outcome being economic devastation for most working Americans.

Certainly America’s affluent and highly-educated urban elite—the sort of New Yorkers attending the debate—would benefit in the short run from enacting a policy that drastically cut the share of the national income going to shopkeepers, nannies, construction workers, and probably 90% of all other Americans. But the eventual social reaction to the total impoverishment of the American middle and working classes might lead to the sort of extreme political reaction we sometimes read about in the history books.

Such points might seem totally obvious to me, but many of the audience members had seemingly never encountered them before, and the results were striking. After ninety minutes of hearing both sides of the issue, there was a swing of thirty-two points toward our opposed position, and we won handily. As a point of comparison, at the reception prior to the show we had been told that the largest previous swing at any Intelligence Squared debate had been the shift of eighteen points that occurred during a 2006 debate on the nature of Hamas in the Mid East conflict.

I have little doubt that those many hundreds of earnest New Yorkers who decided to spend their time and money to attend an evening policy debate rather than see a Broadway show or watch Gravity in 3-D, consider themselves well-informed people, who regularly read The New York Times and many of the leading liberal opinion magazines. But such purportedly “liberal” outlets studiously avoid mentioning that a massive influx of foreign workers would be an economic catastrophe for the bulk of the American population. Hence the apparent surprise of so much of the audience at the notion that a huge increase in the supply of workers might produce to a sharp decline in the market value of their labor and the income they receive.

Such blindness is certainly not restricted to mere political bystanders. As I pointed out in a lengthy previous article, both President George W. Bush and Sen. John Kerry joined together in publicly endorsing an “Open Borders” employment proposal very similar to the one we debated during one of their 2004 Presidential Debates. Their complete ideological agreement presumably reflected the near-unanimous consensus of all the wealthy donors they had encountered during their endless series of political fundraisers.

When a country’s ruling elites have become totally insular in their outlook and unwilling to examine the implications their policies would have for the bulk of their citizenry, the future seems rather bleak.

If the conclusions I drew from most of the debate were these rather depressing ones, there was one totally unexpected note of sharp encouragement.

As many may know, the main economic proposal I have advocated over the last few years has been a sharp rise in the national minimum wage, perhaps to $12.00 per hour, a policy whose consequences would extend far across the American social landscape.

An immediate jump of thirty or forty percent in the take-home pay of America’s working-poor would greatly alleviate their financial desperation. The service sector that mostly employs them is almost completely insulated from foreign competition, so job-loss would be probably be minimal, except in a few narrow categories such as the low-wage immigrant sweatshop industry, whose disappearance would be no great loss in a wealthy country. Employers could meet most of these extra costs by a small, one-time rise in prices and also by somewhat reducing their corporate profits, which are currently at record levels.

Meanwhile, our government would save tens of billions of dollars in reduced spending on Food Stamps, housing benefits, the EITC, and other social welfare programs aimed at subsidizing the working-poor, greatly reducing the pernicious tendency of corporations to maximize their profits by transferring many of the economic costs of their low-wage workers to the general taxpayer. And shifting an extra one hundred and fifty billion dollars of annual income into the paychecks of households that spend every dollar they earn would constitute an enormous and permanent economic stimulus program, but one funded entirely by the private sector.

Although such an idea seems likely to produce huge benefit across American society, it has been fiercely resisted by many of the influential theorists who dominate our academic departments and have their ears of our elites. Indeed, the conventional wisdom widely accepted by the latter is exemplified by an Intelligence Squared debate from earlier this year debating whether all existing minimum wage laws should be completely eliminated.

Given this ideological landscape, I was very pleasantly surprised when one of my debate opponents, Prof. Vivek Wadha, a high-profile technologist and free market academic, repeatedly endorsed my suggested minimum wage hike as a crucial component of any proposal for allowing much larger numbers of foreign workers to seek work here. He reasonably argued that measures along those lines would be necessary to protect the American middle class against an economic race to the bottom produced by competition with massive numbers of foreign workers. I readily concurred that a much higher minimum wage would go a long way to reducing the ill effects of heavy immigration levels, and at times the moderator had to intervene to steer the discussion back to the stated topic of the debate.

It is greatly encouraging to see a prominent figure of the free market economic right place logic and common sense above ideological dogma, and such indications are beginning to raise my hopes that a minimum wage hike so widely popular and beneficial might actually be enacted, notwithstanding America’s totally gridlocked and dysfunctional political system.

Admittedly, such ideas remain total anathema to many of our economic theorists. Indeed, Wadha’s debate partner, Bryan Caplan of George Mason University, a far more doctrinaire libertarian economist, took very strong exception to his erstwhile ally’s ideological heresy. Prof. Caplan instead argued that the unlimited influx of foreign workers should be coupled with the elimination of all current minimum wage laws and other employment restrictions, a combination of government policies whose social consequences seem very doubtful to me.

It is hard to imagine a more favorable venue for an “Open Borders” employment debate than the Upper West Side of Manhattan and an audience of elite New Yorkers, and the striking defeat of the proposal demonstrates how easily such fatal flaws may be understood once both sides of the issue are presented. That the proposal began with such strong support proves that our elite media have acted as unthinking cheerleaders for such extreme ideas, while refusing to disclose their drawbacks.

The “Open Borders” defeat—and the sharp disagreements of the two proponents about the minimum wage—inevitably led to some recriminations, which were expressed in several lengthy discussions on various free market or immigration blogsites. Meanwhile, anti-immigration bloggers crowed at the victory.

And by purest coincidence, I’ll be in DC this Tuesday to speak at an economic symposium regarding my Minimum Wage proposal, so perhaps the political momentum on that issue will continue to grow in the weeks ahead.

(Reprinted from The Unz Review by permission of author or representative)